During our brief trip to North Devon we made time to visit Tapeley Park. Overlooking the River Torridge and with views across to Saunton Sands, Tapeley occupies a great spot. Its an easy garden to visit with four areas, The Italian Terraces, Woodland, Walled Kitchen Garden and the main reason for our visit the Permaculture Garden. Its a quirky place, with classical borders filled with English perennial planting and a large Stately home walled vegetable garden, juxtaposed with compost loos, eco friendly initiatives, dogs are allowed (virtually unheard of) and a permaculture garden. The owner Hector Christie has an interesting philosophy, his mission statement, blog and website all make fascinating and open insightful reading

The Italian terraces are formal in style and some years ago were renovated with the help of Mary Keen and Carol Klein. There are lots of very English perennial planting and enormous sub tropical trees. 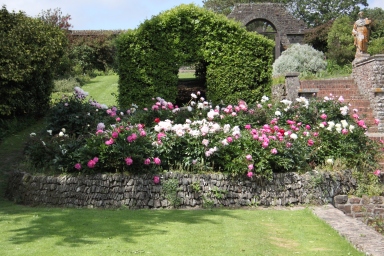 The Dairy lawn is flanked at one end by a colourful display of peonies.

We walked through to the The Walled Kitchen Garden and met the Head Gardener, who had worked at Tapeley for 25 years, he explained the long cold spring has really held back the growth and was hoeing areas that were waist high with sweetcorn last year but this year were still little more than seedlings. Elsewhere, the raspberries were just starting to surge forward. 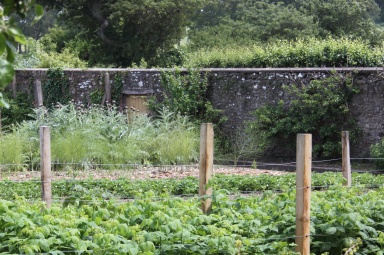 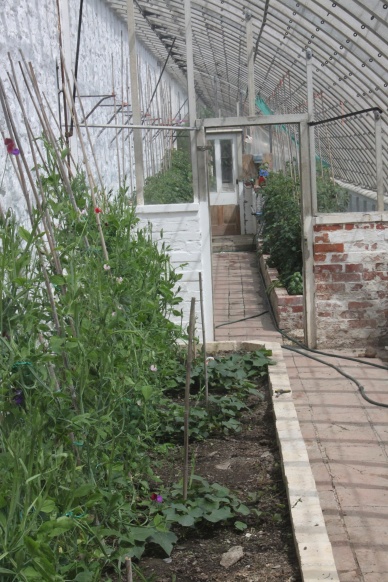 Greenhouse running the length of the Walled Kitchen Garden

The curved roof greenhouses spanning the width of the Kitchen garden were full of Sweetpeas and Tomatoes and despite this years Spring the promise could be seen. There are plans to make the greenhouse heating eco friendly.

The Kitchen garden is to the east of the Italian Terraces, we traversed back across to the west side past the “under renovation” children’s area, which is currently closed and onto the Permaculture Garden.

In brief, permaculture is planting a permanent scheme of plants – trees, shrubs, perennial vegetables, fruits and flowers, without using any chemicals. Its both a practical and philosophical method of gardening.

The name Permaculture is amalgamated from the name PERMAnent and agriCULTURE

The aim is to create a woodland garden, with its own eco system ‘where many different species of plants and animals can live together in a harmony that benefits the entire system’

From Tapeley’s website this explains things better than I can. “Many layers of plants are skilfully placed to support and nourish each other. Firstly a tree canopy of, for example hazels, apples, sea buckthorn and willow; a shrub layer of blackcurrants, red currants and blueberries; a herbaceous layer of globe artichoke, rhubarb and seakale followed by a ground cover layer of strawberries, herbs and wild salad leaves. A vertical layer of climbers such as grapes, kiwi, and brambles increases the growing space by utilizing the vertical dimension. Many of the plants in Tapeley Garden are primarily perennial, that is to say they come back year after year without the need to re sow the seed. Plants that are not (like annual herbs and vegetables) are encouraged to self-seed.”

We visited to try and understand what permaculture is all about and now think in a small way its achievable in most gardens, the wild areas we are all encouraged to foster, to benefit the dwindling bee population could also be a productive and sustainable place for our own home food growing. Like Tapeley (but on a very small scale) I will try this alongside my satisfyingly organised vegetable plot. Maybe in a few years it will be as accepted as organic gardening is now.

Tapeley Park is open 10a.m to 5 p.m Sunday to Friday and from the end of March to October 31st. There is a small cafe and shop and really spectacular views.