In my wild dreams I own a wonderful walled kitchen garden and have so much space I can grow Pumpkins, Squashes and Gourds and should they take off like Triffids it will not inconvenience us.

My Walled Kitchen Garden would include all sorts of fruits, vegetables and beautiful flowers, there would be a wonderful greenhouse and places to sit, wildlife would be abundant and pollinators visit freely. Like minded folk would come to visit and share happy meals, cooked with the produce I grew for my family. There would be an orchard of Apple trees to hide in. We are still looking for that property and the small matter of a lottery win, in the meantime I visit walled gardens and dream.

Last weekend we visited the National Trust owned Wimpole Hall in Cambridgeshire and by happy co-incidence it was their annual 1940’s weekend. 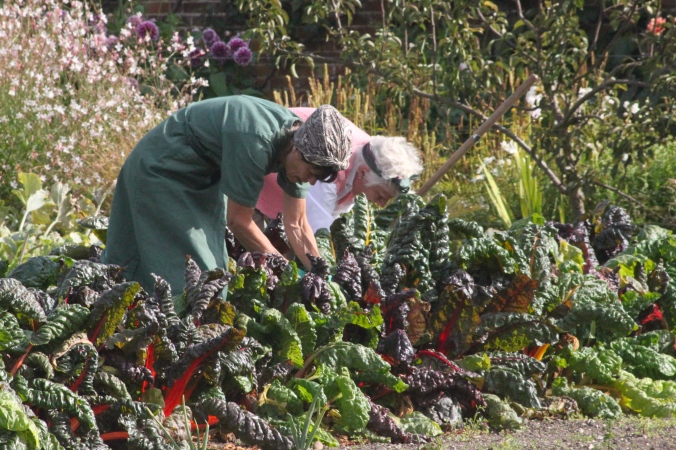 Lots of displays from The Home Guard and Allies. 1940’s music, vintage vehicles and plenty of folk dressed up. Meanwhile in the Kitchen garden, The Womens Land Army were just quietly getting on with it. 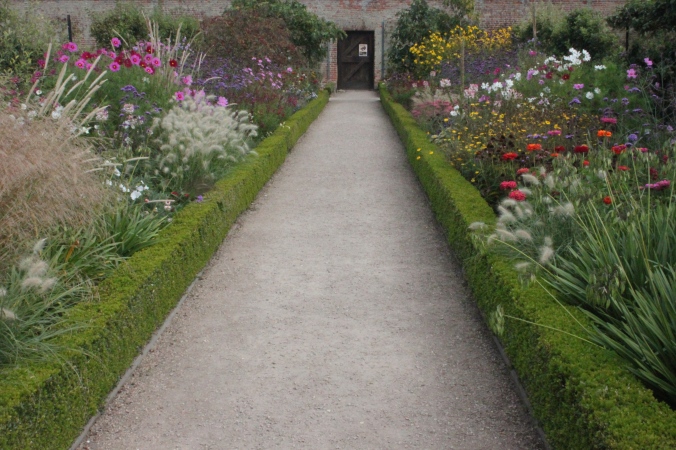 Flower borders inside the Walled Garden

The flower borders were brimming with colour and although some are cut for the house were plentiful. The simple traditional design, a central axis, leaving four enormous beds, each one the size of a tennis court for fruits, vegetables and companion planting, around the walled borders espaliered fruit trees. On one wall the marvellous Greenhouse where currently a part of it houses the Pumpkin display.

On the outside of the Walled Garden, long full borders lead onto the Apple Orchard.

Outside of the Walled Garden

The Wimpole estate is fortunate to include a farm – Home farm, where sheep, goats, cattle, pigs and horses are all cared for and as a consequence a rich supply of manure is available to the Kitchen Garden. We had visited the farm several times before when the children were small so headed off to the house itself and a walk past the formal parterre garden.

Beyond the formal garden is 3,000 acres of parkland and farmland, its a wonderful place to walk and dream.

Produce from the walled garden is used in the Restaurant, it was packed during our visit, so we headed to the Stable yard cafe, pleased to say they served a very good gluten free chocolate cake and a decent coffee.

There was an error retrieving images from Instagram. An attempt will be remade in a few minutes.